This research segment deals with the adaptation strategies and usability of cryophilic (= cold-loving) freshwater microalgae, i.e. snow and permafrost algae. Cryophilic algae are exposed to a variety of extreme stress factors in their natural habitats. First and foremost, these include low temperatures, intense light and UV radiation, dehydration and greatly varying nutrient availability and salt content. The goal is to characterize the isolates in terms of their diverse strategies for adapting to these extreme environmental parameters and to take the special enzymes and metabolites developed from the algae and use them in industrial applications.

The CCCryo culture collection, which is unparalleled in its scope and diversity, serves as the basis for this. The algae strains were collected and isolated during expeditions to the polar regions. Cyanobacteria, mosses, fungi and eubacteria are cultivated as well. The www.cccryo.fraunhofer.de website provides strain details and ordering information.

Expand all Close all

The sixth expedition to Svalbard was undertaken in 2013. The mission was to gain a comprehensive overview of the distribution of snow algae fields along the entire Svalbard coast and nearby islands to the east. What had been unclear in the past was why red and green snow – the mass phenomenon of snow algae blooms – was very pronounced in some regions but did not occur in others. During the expedition in 2010, the availability of nutrients was ruled out as the sole factor. With the help of a remote-controlled octocopter system with VIS and IR cameras as well as chemical soil analysis, it was possible to now show how the predominant geological formations in the different regions of Svalbard and the small-scale topography affect the prevalence of snow algae. For example, these extremophile organisms prefer siliceous soils (sandstone and gneiss) with low pH levels and low carbonate levels over lime-rich regions. In contrast, there is a specific taxonomic group found particularly frequently in calcareous soils. Microclimatic conditions, such as sufficient precipitation, also appear to be important. These field results offer important clues into the ideal culture conditions for these complex algae.

From 2015 to 2016, two CCCryo strains »visited« the International Space Station (ISS) as part of the BIOMEX project coordinated by the German Aerospace Center (DLR). More specifically, they spent a good one and a half years just outside the ISS. After returning to earth, they exhibited their extraordinary adaptability to different conditions, which apparently also includes the extremes outside the ISS, e.g. vacuum, UV-A/B/C radiation and intense temperature fluctuations – nearly all samples survived their space journey.

Ice structuring proteins (ISP), which are also frequently referred to as ice binding proteins (IBP) or antifreeze proteins (AFP), are typical for obligate cryophilic snow algae. These proteins are released from single-cell algae and bind to the ice surfaces. Because they only bind to a certain layer of the ice crystals, they prevent uncontrolled growth and force the ice crystals to form a small, hexagonal bipyramidal structure, thus preventing the recrystallization that usually occurs in freezing solutions.

The Swiss company Mibelle AG Biochemistry develops innovative additives for cosmetics. During the long-standing partnership with Mibelle, a process has been developed for the industrial-scale production of special ingredients from snow algae. We are constantly developing and optimizing the production process. We also work according to standard operating procedures (SOP) to ensure the production of high-purity, uncontaminated algal biomass.

The »snow algae cosmetics« from various brands are currently sold in the cosmetics sector worldwide.

Other natural ingredients from CCCryo strains for innovative cosmetics are described in our brochure. 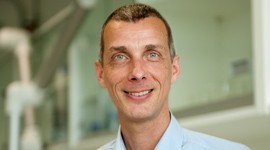